In "Los Claros" we have been organizing two types of monterías (Driven hunts with dogs), the original montería and the montería de gestión. The difference is based on the animals that are hunted.

In the first case, the main objective is to hunt deer and wild boar trophies and exceptionally mouflon. These are organized in groups which can range from 20 to 40 people.

On the other hand, the monterías de gestión are meant for crowd control, where the animals to be hunted are hind, female mouflon, wild boar, and exceptionally deer and mouflon.

In our hunting estate we can organize up to 3 monterías or 6 ganchos ( driven hunts with a reduced number of people, with a maximum of 10 people and fewer dogs) per year.

Private groups can personalize their driven hunt outing by specifying what animals to hunt and how many. 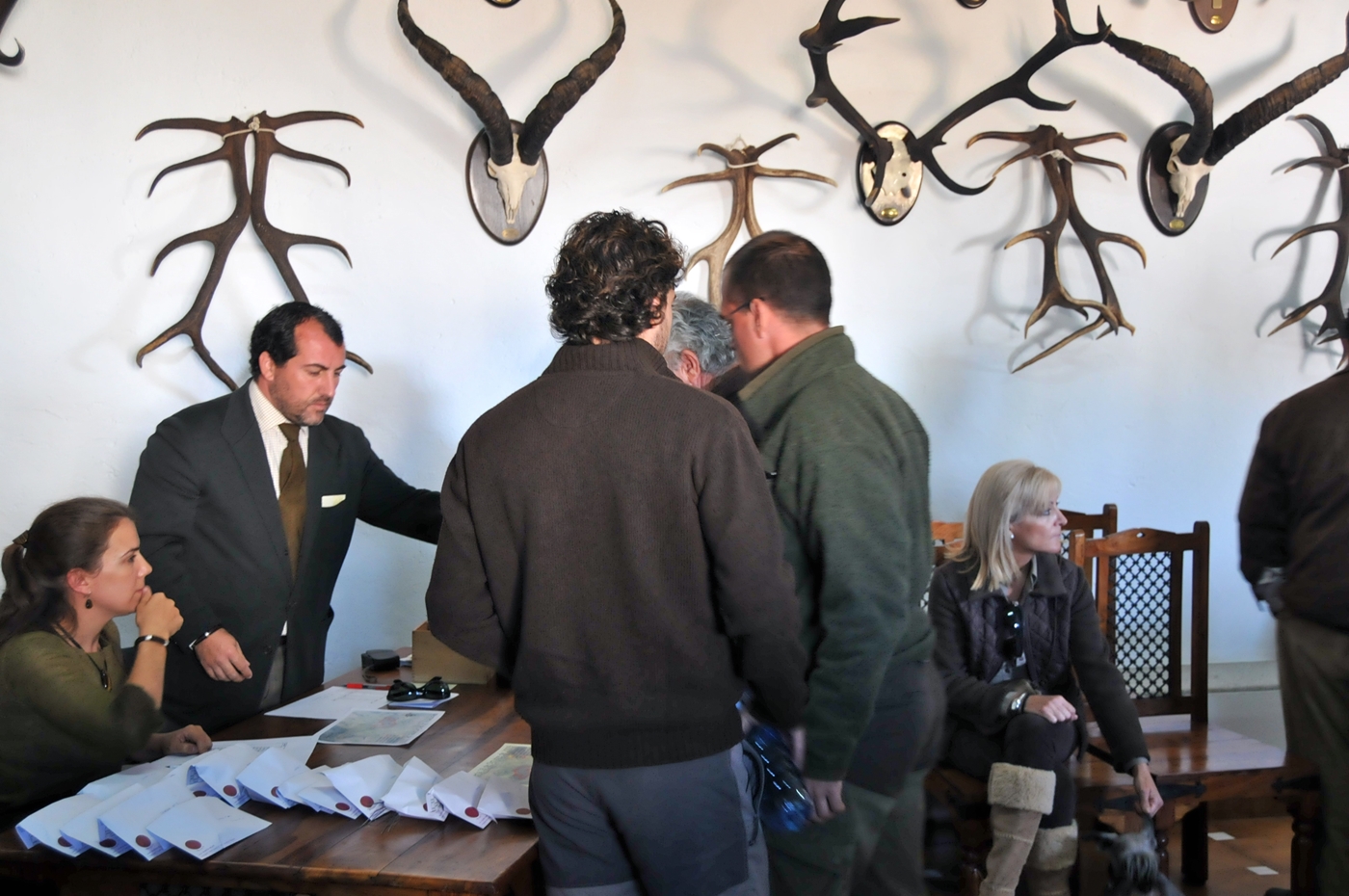 Legally, driven hunts at “Los Claros” can be organized after October 12th. Having said that, we consider November and December to be the best months for monterías, since earlier months can be too hot and dry for dogs to preform. They can also take place later, from January 10th until the last day of the season (usually around 15-20th of February) although it is important to keep in mind that weather conditions can be harsher during this period, to the point where the event outing might have to be suspended.

What is a montería?

The description of this practice in writings dating from the 14th century, proves that it has been an emblematic hunting activity for centuries in our country. Nowadays we keep practicing monterías, which we consider national heritage and a unique form of hunting in the world.

Essentially, a montería is an outing in which, with the help of a cry of hounds (20-25 dogs specially bred and trained to preform in this type of hunt) the animals are forced to leave their settlings and go past certain areas where the hunters are placed.

The choice of mountain area, the dates for the hunt, where the hunters will be placed and how many places will there be, the number of hound squads and where the hounds will be set lose are part of a long list of decisions to be carefully made in order to achieve a successful hunt. In past times, all this organization required the involvement of many specialized people. Nowadays, thanks to the fencing of land, the organization process has been simplified. Nevertheless, it still means a great financial and human effort.

Even with fencing, sometimes the characteristics of certain mountains can make it complicated to maintain the population of animals under control, which makes the montería a vital method for animal crowd stability. In addition, they also have an unquestionable positive ecological impact by substituting extinct predators in their hunt for the weakest pray. Thanks to the brilliant work done by all the participants in a montería, in a day an average of around 6-12 animals are hunted per place. The outing can be organized with a very varied number of hunters, from 10 to 100 and many dogs. Nowadays, it is usual to take part in outings where 100 animals are hunted, this was unimaginable in the past.

In the commercial monterías, there is usually an established quota for animals to be hunted, what this means is that each hunter in entitled to hunt a specified number of animals. This quota is negotiated between the hunter and the country estate and the quantity is usually equal for every hunter participating in the outing. In this type of monterías, it is mainly males that are hunted, but in any case the quota always specifies the quantity of animals, distinguished by sex and species that the client is entitled to hunt (wild boar is the only exception, in which sexisn’t used as a distinction). If one of the staff members which is accompanying the hunter considers that an animal has been injured or killed, it will be considered as part of the quota. In the case of a missed shot, the hunter can go for another animal. 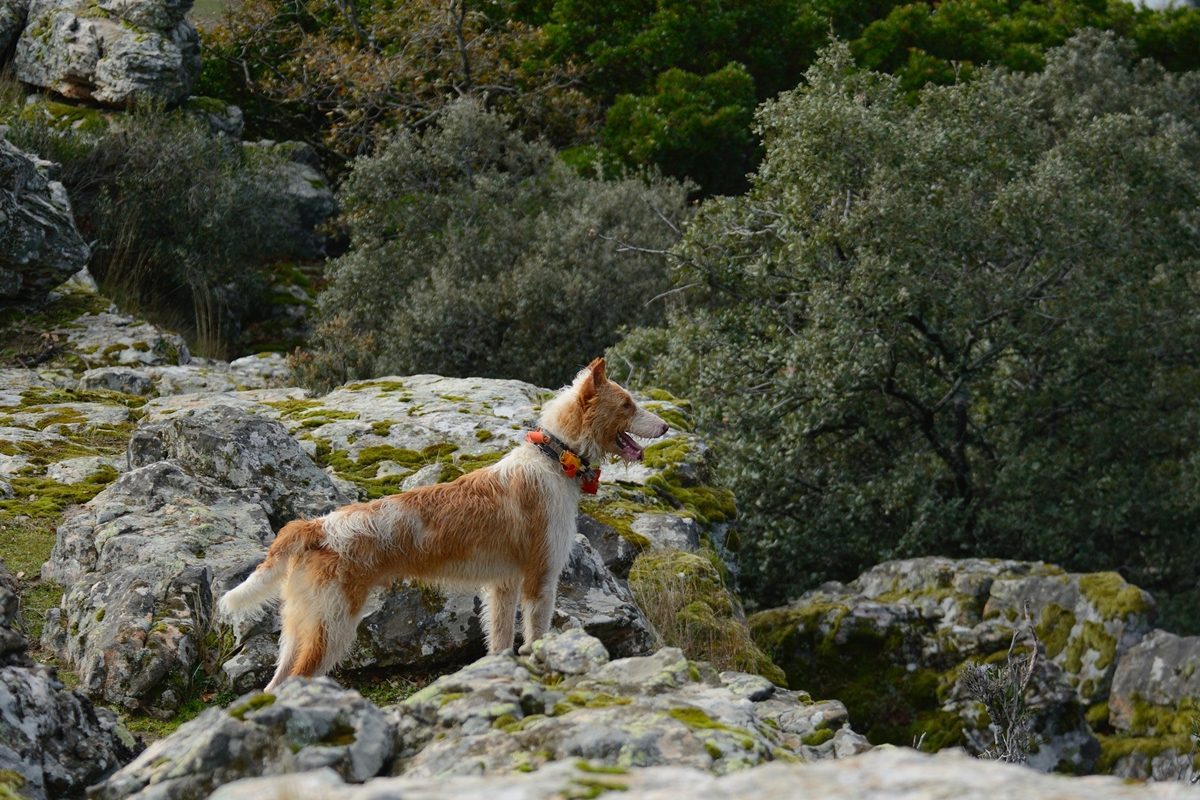 In this type of montería, once the type of animal to be hunted is established, distinguished by specie and sex, the hunters can shoot at them with no established limit. In this type of outing, clients pay a determined quantity, usually high, to be entitled to hunt any animal (within agreed species and sex for the montería) that comes across their places. This type of montería is recommended when there is a noticeable excess of animals in certain areas.

When the hunter wants to choose what animals to shoot and in which quantity during the hunt, we can consider it cazar a res muerta. This means the client will pay an initial quantity to enjoy our hunting services and for the permission to shoot a determined type of animals, usually females and wild boar. Then, the hunter will be allowed to shoot at the animals he wishes, always within those animals (sex and species) agreed, knowing beforehand the price of every animal to be shot.

This method is usually aimed at females and babies of the species subject to hunt. In the case of shooting males, they will be selected based on their selective physical traits, conserving the biggest and strongest for breeding. This type of montería is absolutely necessary but requires a strong effort and sacrifice from hunters, since they will have to shoot females and babies in some cases and will have to watch the best trophies pass by while shooting others which aren’t so desirable, by learning to distinguish which are or are not selective for breeding.

Proceeding of a montería.

The proceeding of a montería is usually common for all kinds. As a general rule, the proceeding is as follows: The hunters will spend most of the day in the hunting estate where they will hunt. The hunters are usually called at around 8-9 a.m. in the house of the country estate where they will be hunting, there they will be served breakfast, and when everyone is ready a raffle for the hunting places will take place. Each hunter will be assigned a hunting place and a staff supervisor who will know the procedures and all peculiarities of the estate and will be at his service for everything the client may need. In some monterías there are no supervisors and this can suppose a real challenge for foreign hunters who may not know who to follow and where to place themselves. The hunters will be taken by truck to their places (as close as the vehicle can get). Once all hunters are placed, at around 10-10.30 a.m. the dogs will be set loose and guided by the hound pastor, they will proceed to cover the hunting area for the next 3 to 4 hours. The end of this phase will be marked by the blowing of a horn by the pastors to call back all dogs. As of then, the hunters, assisted by the staff members will proceed to mark the whereabouts of the dead animals so that when the staff come to pick them up, none are left behind in the mountain. It is also important to indicate the blood trails of those which are wounded to try and localize them. Once all deceased and wounded animals have been found, the hunters will be taken back to the estate house, where they will be served appetizers before a nice meal. Meanwhile, staff members will take the hunted animals back to the house where they will be placed for the hunters to take pictures, this will be at around 5-6 p.m. although usually, hunters tend to stay a bit longer, having a drink and sharing their experiences. For supper, they will be taken to the place where they had been staying the night before.

Given the fact that this activity requires the coordination of everyone involved, it is highly recommended for all hunters to stay in the same hotel the night before the hunt in order to avoid delays. This will make it possible for the raffle to take place after dinner and solve any type of questions. For this reason we tend to book a hotel for all hunters the nights before and after the montería which will save the hunters from having to go on long journeys in a tired physical condition.